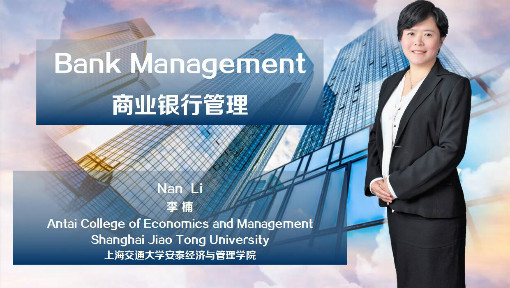 A well-functioning financial system is fundamental to a modern economy, and banks provide unique and vital functions in society.

From the world's first intuition that provides credit services to the Imperial Bank of China, the first modern bank in China established by Mr. Sheng Xuan Huai, the founder of Shanghai Jiao Tong University, then to the top five largest banks in the world after years of reform; from the first bank draft to Mobile Payment, the Chinese wisdom helped the banking industry go through many ups and downs.

On the other side of the Pacific Ocean, the banking industry in the U.S. has also been through many ups and downs, from the Bank Run in the 1930s to the Savings and Loans Debacle in the late 1980s, then to the Subprime Loan Crisis in 2008.

Through case studies, building on basics in finance and principles in economics, I will analyze the specialness of the financial intermediaries, and risks faced by banks, as well as the game played between the regulators and bank managers.

The electronic course certificate is no longer free at icourse. Only authorization is avaiable for application.

Q :  What are the textbooks and references for this course?

A :   The  information in the lecture notes comes from the following sources:

2. Website of Federal Reserve and People's Bank of China, and other central banks

3. Journal articles in the references for each topic

4. News articles and other documents/videos from the internet (open-source)

Q :  What are the differences between the Lecture Videos and zoom-live class video

A :  Lecture videos are short and concise (10 hours in total), contains the discussion about the core concepts and methods in this course. The zoom-live class videos contain much richer content, including discussion of the latest news and development in the banking industry and related questions, such as "mask run" virus "bank run", the monetary policy during Covid-19 pandemic and etc.